A decade in Nepal drawing to a close 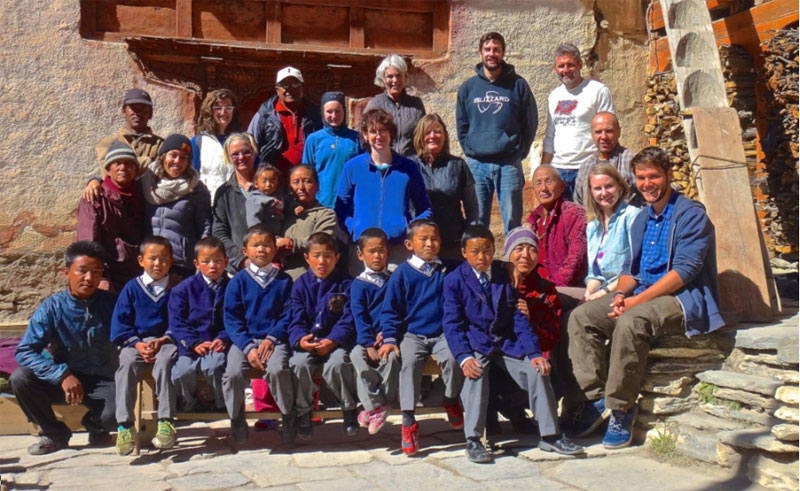 With Restoration Works International’s partnership, the Chhairo community has brought a crumbling ruin back to an operating monastery over the past 11 years.

It was a bittersweet trip to Chhairo this autumn. Sweet for what it signified: we are close to reaching our goal of restoring this 300-year-old monastery. Bitter for knowing it was our last formal visit to a place that has become so special to all of us.

RWI’s participants contributed in many ways
Thirteen individuals from the US, Canada and Australia participated in the ten-day autumn work efforts. Some volunteers painted the gyalpo under the guidance of Lama Shashi and his brother Chakra. Others cleaned the ancient sculptures in the historic main chapel and painted signs so trekkers can better find their way into the gompa. The RWI volunteers took turns giving tours to the trekkers who visited daily from all over the world. The volunteers interested in hardier manual labor moved rocks to pave a clear path off the trekking trail into the gompa and filled an abandoned sump pit to ready the front of the gompa for landscaping.

“Lama Sashi set a contemplative mood with his monk – chanting tunes. Myself, another member of my group, and two painters from the Everest region of Nepal painted the sub layers of Sashi’s masterpiece while he sketched away on the empty walls.” – Sara, participant

Chhairo’s young monks are thriving
Most days also included games with the young monks. The volunteers brought a frisbee, a soccer ball, and a football, as well as three juggling balls, so sport was part of each day’s cross-cultural activities. They also brought donated coloring books to support the art instruction the boys receive.

Gompa rebuilding progressing at good pace
The Nepali construction crew of 12 men and woman, directed by Chakra, made significant progress with the more skilled construction work. They expertly plastered the interior walls of the newly constructed southern wing of the courtyard, poured the ground level concrete floors of the building in a single day, and weatherproofed the roof for the oncoming winter, and until the second story can be started next spring. The crew also fortified the roofs of the rest of the gompa complex.