“What I like about the program is that our funds helped to support the project and locals, but members of the community were also involved in the project. The Nepali people were involved at all levels, from decision making to general labor.” – Chhairo participant

The Chhairo Gompa, a Tibetan-style Buddhist monastery built in the 1600s, is located along the Annapurna Trail in the region known as Lower Mustang, the religious center of the Thakali people. When the Chinese government closed the border to Tibet in the 1960s, the Nepali salt traders were forced to relocate their families, and the villages along the trade route met with economic hardship. As a result, the last of the resident monks left Chhairo in the 1970s, and the gompa fell into disrepair. The Bhattachan family, who has ancestral ties to the gompa, established the Chhairo Restoration Group in the early 2000s, joined by Lama Shashi, a renowned temple painter, and his family. Restoration Works International (then Cultural Restoration Tourism Project) sent our first volunteer group to the gompa in 2005, and we have worked seasonally through 2015. The local team on site included architects, masons and carpenters along with a group of manual laborers. The majority of the team has been employed on the project since its inception. 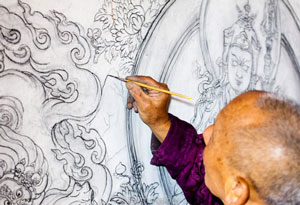 A world-renowned thanka painter and Buddhist monk, belongs to the family of artists responsible for many of the sculptures and wall paintings at Chhairo and other area gompas dating back five generations. Sashi-la, the monastery’s head lama, is now in charge of the restoration and conservation of the fine artwork of Chhairo Gompa; he is also working to establish a traditional Buddhist art center at the monastery in order to provide training to both the monastic and secular communities. A Chhairo local, Sashi-la was instrumental in the rebirth of the gompa and provides the modern-day link to the ancient wisdoms of the Tibetan Buddhist tradition.

In 2016, Restoration Works International concluded our commitment at the Chhairo Gompa by funding the reconstruction of the kitchen and visitor block. Over the decade that preceded that final phase of restoration, RWI volunteers worked alongside the Chhairo community and our partners to restore the monastery to its rightful place as a focal point in the Lower Mustang region. An estimated 75 percent of the reconstructed buildings were built from repurposed materials.

We cleaned, repaired, and secured precious wall paintings in the chapels, laid the slate courtyard, patched and plastered temple walls, rebuilt roofs and added stone parapets and copper cupolas, disassembled walls for reconstruction, cleaned and unearthed carved woodwork and temple relics, helped paint new wall murals, rebuilt structures using traditional materials of stone, mud, timber, and copper, hauled wood and stone, sifted dirt, and mixed cow dung for plaster. Whenever possible we reused existing materials in order to maintain the integrity of the structure while completing the project in the most cost-effective manner.

In 2012, a group of young monks moved into the gompa to pursue their religious training, the first to do so since the 1970s. Overall, the restoration provided ongoing jobs and income for the local people in the form of construction work, cottage industries, tourism, and maintenance. As the monastery continues to prosper and grow, so will the community’s fortunes, along with a connection to its heritage. Thank you to all our volunteers who were part of this exciting transformation!

Restoration Works International invites you to a meetup of RWI alumni, supporters, and friends on March 22nd in Washington, DC. We'll be gathering in the serene Dharma Room of the [...]

Why I’m an RWI group leader

RWI board member and longtime volunteer, Bob Pizzi, has been to every Restoration Works project - multiple times! In his message below, he shares why he is heading back to [...]